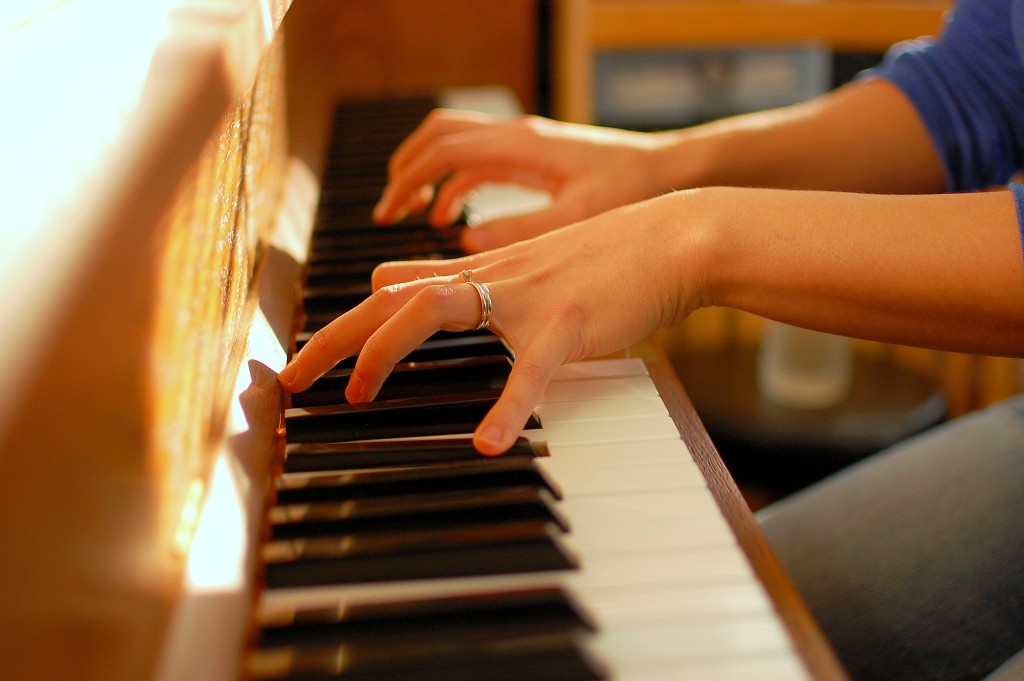 Ever wondered where the phrase “Music to my ears and my heart” got its roots from? Well, no need to scan through ancient English Literature for the solution because scientists already have an answer to that question! Scientific studies conducted on musical instruments and their positive effects on human body, have shown that playing a musical instrument (especially Piano) can act as a remarkable stimulant for human brain and entire body.

While the studies show that playing any musical instrument helps, playing a most complex instrument like the Piano has its added advantages. Unlike the other string and wind instruments which use only a single line of notes in either trebled or bass clef, Piano requires both bass and treble clefs as well as multiple lines of notes to be played at once! This extra effort required to play the piano helps to stimulate the brain and brings out emotions much better than other instruments. Thus, playing the piano might be more complex, but the benefits of playing it outnumber the benefits of playing those other musical instruments.

To further demonstrate the benefits of playing piano, we have listed below 9 highest-impact benefits as proved by scientific studies:

Students who take a regular piano class or are a regular piano player, show higher levels of intelligence and understanding in the class room as opposed to kids who play other instruments or do not play any music at all. Studies conducted across various schools and colleges in the USA and Canada, found significant correlation between the number of years spent learning music and academic performance. The studies showed that students who learned piano were able to comprehend the mathematical and scientific concepts much better than the other students, and so generally scored higher than others in tests. The scientific reason behind this was that kids who played piano, showed a higher level of spatial-temporal reasoning which is the reasoning ability to do deal with ratio, proportions, fractions and thinking in space and time.

Motor skill is the ability of human body to make smooth and accurate physical movements. It is developed in the human body by practice or prior experiences. Muscle memory, is another term which is associated with Motor controls. It is highly procedural and you have to keep practising a particular muscle movement, to keep it perfect or else it will be lost or corrupted. Piano playing involves regular, intense practice and so helps the body to develop long-term muscle memory which results in fine motor skills. This muscle training helps in enhancing the communication between the nervous system and the muscles, thus resulting in a much less effort required for motor movements (or in simpler terms, you get nimble fingers).

In order to become an accomplished piano player, you must be able to move your fingers, hands, arms, legs and even your spine in perfect coordination, with perfect reflexes. To get both hands to coordinate properly, it requires your hands and eyes to work in tandem at the signals received from your brain. Piano playing allows you to develop this hand-eye coordination and at the same time stimulates the brain, which goes on to improve your body’s reaction time and productivity. And as you learn to play piano using with both hands at a time and then, learn to use them each separately, the neural connection between the left and right paths of your brain also gets stronger.

A study conducted by Japanese scientists proved that playing a piano helps in reversing the stress genes in the human body, more than any other musical instrument. Piano playing allows you to escape the dull monotony and stresses of daily life, and refreshes your mind and body which helps you to concentrate better. A soothing piano tune helps to bring out emotions and relaxes a person. However, it is imperative that while playing a piano, the person uses the perfect posture or else he/she runs the danger of introducing a different kind of stress (physical strain) on the body!

And now to the part where we explain the reasons how phrase “Music to my ears” came to existence! Scientists have proved that a regular piano player never ages (or at least ages significantly slowly) in the Auditory Cortex (part of brain which is responsible for processing sound). When you play a piano, you are straining your ear to recognize pitches and tones in a way different than others can. A perfect Fifth will always ignite a different reaction in your brain than say, a perfect Seventh. This is caused due to your brain’s ability to recognize different levels of pitch and intervals in a musical tone or any tone for that matter. Thus, “music to my ears” doesn’t just refer to a tone feeling pleasant to hear, it also means that it helps your ears and brain to improve and get better!

Creativity is what inspires people to become an inventor. Although, you may not be born with it, Creativity can be acquired by improvising regularly. Piano learning instils this habit of learning and improvising constantly, and in the process helps with the knack for creativity in a person. Creativity does not involve a particular region or side of the brain, instead it utilizes different parts of the brain during different stages of a creative work. While being creative at playing a piano, a person constantly stimulates various parts of brain which helps them with creative thinking – an ability not just helpful with piano playing, but also while performing other activities in life.

A research done in St Raphael University, Milan, Italy showed that kids who begin piano lessons at an early age tend to have a much larger vocabulary and better reading and learning abilities than other kids of their age. This benefit of piano playing can be attributed to the fact that piano helps stimulate the brain’s power and enhances the learning capability of a person. Thus, beginning at an early age makes kids’ brain sharp enough to catch on to whatever new words or skills they are taught, as compared to other kids. The same ability also helps them in learning languages, both own and foreign, at a much faster rate than others.

A study at the University of Miami, showed that a group of people who took regular piano lessons registered a high levels of Human Growth Hormones or HGH, particularly in older adults. This was significantly higher than that of the group of people who were not taking any piano lessons. HGH is a hormone which is linked to the reduction of aches and pains that set in the human body with age. Thus, increased levels of HGH leads to a slower onset of osteoporosis and increased energy levels, sexual function and muscular mass. This essentially means that it is never too late to start learning piano, no matter how old you are!

Apart from all these health and intellectual benefits, piano playing also ensures a complete, all-round personality development for a person. This is because playing a piano requires a balanced functioning of the body and mind. Playing a piano requires more concentration, determination, patience and endurance than any other musical instrument. Regular piano playing instils a sense of discipline, correct attitude, confidence, self-contentment and achievement which goes on to reflect in a person’s personality and other traits.

Next post: How to Learn to Play the Piano

Previous post: 10 Things You Should Do/Know Before Your Child Starts Piano Lessons

Learning to play the piano